The Grand Budapest Hotel: My review

THE GRAND BUDAPEST HOTEL for http://www.clubfashionista.com

At times I feel that my tastes are unnatural compared to the opinion of the majority of the people in this planet. Some call it having a rebel mentality in which I do not follow the trends and what everybody is hyping about. I call it being opinionated and sticking to my feelings. Such is the case with artists like Beyonce and Rhianna. I openly admit to NOT liking their music and I have been called crazy for it.

I went to see the movie The Grand Budapest Hotel with my hopes up. So many people have been raving about how great of a movie it is. Knowing that I was on my way to see a Wes Anderson movie, I knew to expect a well respected and talented cast ensemble. Such was the case with a great cast which consists of actors Ralph Fiennes, F. Murray Abraham, Adrien Brody, Bill Murray, Owen Wilson, Willem Dafoe, among others. I was not dissapointed as to the acting is considered. Perfect line deliveries and Anderson’s deep rooted love for symmetry in his compositions is what actually kept me awake throughout the movie. 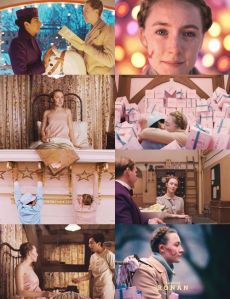 This adventure-comedy-tragedy tells the story about a legendary concierge (Fiennes) at a famous European hotel on the verge of World War II and his protege, hotel boy and film narrator Zero Moustafa. It involves the theft and recovery of a priceless Renaissance painting and the battle for an enormous family fortune. Because of the lack of similarities between two actors playing the same character at different times, I became pretty confused at an early stage in the movie. Abraham (older Moustafa) and his early version, Tony Revolori, do not look like each other at all. By the time I figured it out it was already too late for me to catch up with the whole story. The crazy sped-up chase scenes added to my confusion. It became too chaotic and frantic. Even with the sections being introduced by titles with chapter readings, I was lost. Although I love comedy, I am not a fan of the caricaturistic technique used in some of it and this movie contained heavy doses of Anderson’s trademark gift which is making the most mundane look ridiculous.

On the other hand, I absolutely loved the photography, images, symmetry and color. The visuals were breathtaking and perfectly executed. It was beautifully designed with a gorgeous use of color and texture. The Costume Design department might be on their way to Oscar night. The uniforms for the soldiers and hotel bellboys were immaculately designed. 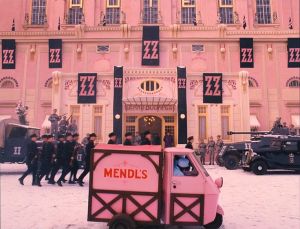 In conclusion, this quirky, fast paced, dark comedy is not on the list of my favorites. It takes more than engaging photography, list of a great cast, and people raving about it for me to leave the theater saying, “Wow, now that is a must see”. Still, it is all about perspectives and tastes!

Review on movie MALEFICENT for http://www.entertainmentaffair.com

This year marks the 55th Anniversary of the classic Disney movie many of us grew up watching, Sleeping Beauty. It was a fairy tale about a princess who falls under a spell of eternal sleep caused by the favorite and the most feared character in Disney’s gallery of infamy, Maleficent.

Five decades later, we welcome the story of this iconic villain, portrayed by actress Angelina Jolie, in Maleficent. This film explores the untold story of this character and the elements of her betrayal. Driven by revenge and a fierce desire to protect her land, she places an irrevocable curse on the king’s newborn, Aurora. The child grows in between a forest kingdom she has grown to love and the kingdom that holds her legacy. Maleficent realizes that Aurora may hold the key to peace in the land and is forced to take drastic actions that will change both worlds forever. What the viewer will see is the untold story of Maleficent. We get to see her as a young child and will understand what it is that drove her to the dark side.

With so much imagery in this story adorned by castles, creatures and fairy tale cottages, two time Oscar winner for Production Design, Robert Stromberg (“Avatar”, “Alice in Wonderland”) was the perfect person to bring on board. Except he joined the production as a Director, making Maleficent his directorial debut. When I asked him about the challenges of coming in as a director he answered, “It was actually an excitement. I was really looking forward to being able to use those tools that I had not been able to use and that is performance and emotion through dialogue. It makes me feel that I painted a complete picture for the first time.” In showing us a different side of the original film he said, “I wanted the people to feel that they had seen and remembered the essential elements of “Sleeping Beauty”, but with cool and new stuff. It was interesting to show a different side to this character of Maleficent, her backstory.”

For actress Elle Fanning (“The Curious Case of Benjamin Button”, “Super 8”) who portrays Aurora, winning this role was a dream come true. “When they handed me the script I felt as if they were handing me the crown. It’s been sort of everything that I dreamed of. It’s been really special to play such an iconic character.” On the biggest lesson she learned from working with Angelina Jolie, she said, “I learned to always pay attention to all the details, such as your costume. Your character is something that will always stay with you throughout your acting career. Angie does that. Also, people can get intimidated by her but it was great seeing the playful side of her, especially when her family was around the set.”

If you have seen the original animated film of Sleeping Beauty or even if you haven’t, Maleficent promises to be a great movie that everyone will enjoy. It gives you ‘the other side of the story’ and although you think you know the end of this movie, you really have no idea on what to expect!

Disney’s Maleficent opens in theaters in 3D, RealD 3D, and IMAX 3D May 30.

Take time to do what makes your soul happy

Night Thoughts of a Literary Agent

A stomach full of travel adventures

Photography at a different level

because anything is possible with Charisma

Welcome to the Power of PIES. I apologize to those coming to this site looking for dessert : ) Instead, the PIES represented here is the powerful combination of Prayer, Imagination, Emotion, and Starting now. Read on, and I promise you will be impacted in a positive way. After all, life is sweet. Enjoy it!

Entre caminos
What an Amazing World!

Seeing, feeling and exploring places and cultures of the world